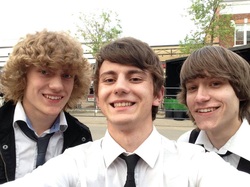 This was Bandolier's performance in the Martha's Music 2014 Battle of the Bands. The show was set up on an outdoor stage in front of a panel of judges and an eager crowd. After some minor technical difficulties, the band pumped out a rockin' 5 song set that managed to garner them 1st place in the event.
As a result, the band won a new sound system, a scholarship to participate in Wetaskiwin's Jazz Camp for a week, and a showcase in the Bailey Theatre in Camrose.
This show would also serve as the live debut of a new Bandolier tune, "Stockbroker".